Evangemom: A Tribute to Mothers

It was a spring morning like any other for my wife, Kathy and then two-year old son Eliah: playtime at the local park. Our son was enjoying himself in the sandbox, when another little boy showed up with his mom. As the boys got busy playing, the moms exchanged small talk. Kathy immediately noticed the jogging stroller and running clothes. “Are you a runner?” she asked. “I’m trying!” replied the mom. They soon found themselves talking for quite some time about their running experiences, until before they knew it lunchtime had come and gone.

“My name is Kathy by the way.”

“We should run together some time.”

Numbers were exchanged, and an appointment was made for a morning run later that week.

As spring turned into summer, Kathy and Adi’s morning run turned into a weekly engagement. Before long they were training for races together. As the miles passed under their feet they talked about life, family and God. Kathy would express her faith in and love for a God who sustains her in the most difficult of times. She shared, not in a calculated or formulaic way, but in tones as natural as the air they were breathing, and as honest as the ground they were running on.

After about a year of running together Kathy became pregnant with our second child. While the morning runs were less frequent, the friendship formed remained strong. Adi couldn’t shake this feeling that there was something more to life than she had known. Growing up Catholic, she had always believed in God, but hadn’t experienced Him in the ways Kathy described on their runs. So she would stay close to Kathy, and hope for answers.

…the Kingdom of God shows up, not just at the concert or evangelistic meeting, but also, and especially, at the playground.

Another year passed and this time it was Adi who became pregnant with her second child. A handsome blue eyed, blonde haired boy was born whom they named Ryan. Because he was such a healthy boy, it troubled Adi, when after several months he seemed to be losing weight. After several doctor’s visits and misdiagnoses came the crushing news: Leukemia.

As Adi shared the news with Kathy they both cried. “If there was ever a time for answers, it’s now.” thought Adi. So she asked Kathy why this happened to her son. Kathy didn’t have an answer, so she asked me…the professional. “Er…um…books! Yes, let me find some books on that.” The answer, it turned out wasn’t as important as the fact that Adi was reaching out, opening herself up to God. So what did these two suffering, searching moms do?

Last Sabbath another child was born… again. But just before she got baptized, Adi and her husband dedicated their child, Ryan to God. Full head of blonde hair, bright blue eyes, and cancer free. 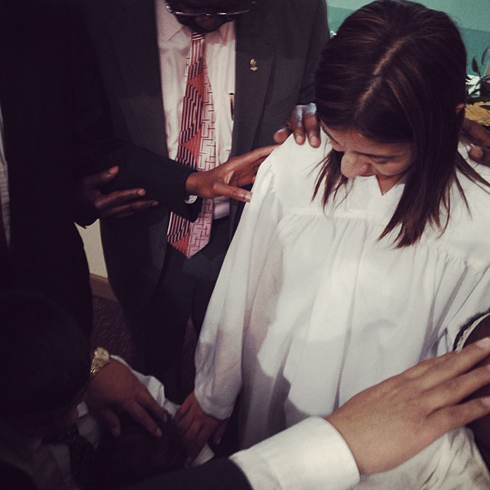 Adi being prayed with before her baptism.

My wife, like so many moms I know, has gone through life painfully unaware of the gift she is to the world. On this Mother’s day, I am grateful for her, and all the moms like her. And for the lessons they’ve taught me in soul-winning. That the Kingdom of God shows up, not just at the concert or evangelistic meeting, but also, and especially, at the playground. The Kingdom dress code consists of running shoes and shorts as much as it does skirts and suits.

So, the next time I’m on playground duty I’ll be sure to keep my eyes, and heart more open. Meanwhile, I’ll be working on my running pace. It’s hard to witness when you can’t breathe!

Angelo is pastors in Gainsville, Florida and is an adjunct instructor with ARISE. He finds great joy in ministering with his family and would be happy to welcome you the next time you pass through.

October 2, 2020 On the Nature of Forgiveness and When to End a Relationship Read More