Sherise: Puzzled, frightened, and confused. Doing her best impersonation of a deer in the headlights.

Matt: “Sherise, when we’re surfing, you do exactly what I say, when I say it! You do not try to make sense out of what I say, just do it!”

Matt: Catches a wave. Rips, slashes, tears it up. Throws buckets of spray with every turn he does on his trusty surfboard.

Sherise: Sitting a little too close to shore with a set wave racing toward her.

Matt: Paddles toward Sherise yelling: “Paddle further out! Paddle out!”

Sherise: Not listening. Decides to paddle in. That is to say, toward the shore. Thinks to herself, “if I cannot see the wave, then perhaps I’m safe.”

Matt: Waving and flailing his arms wildly trying to get her to stop paddling into the danger zone.

Sherise: Gets picked up by the cresting wave and tossed over the falls. Disappears underwater.

Matt: Exasperated. Thinking about how he will chastise his wife for not listening to him and placing herself in harm’s way once again.

Sherise: Stands up in waist deep water with blood flowing from her nose and says, “I think I broke my nose.”

Matt: Loses sight of his anger and frustration then goes into EMT psycho-man mode until Sherise is safe at the hospital. 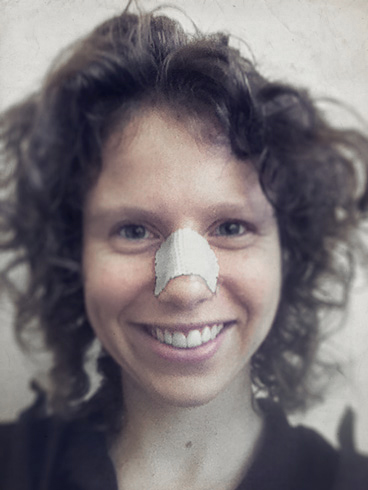 I’ve pondered this situation for several weeks now and have found, as with so many things in my life, a profound lesson.

As I watched my wife sitting in the trajectory of the oncoming surfer I realized, in a way that she could not, that she was in very real danger. Doesn’t God realize the same when watching over us? There was not really much that I could do for her due to the circumstances. What I could do was speak to her. I could give her direction and instruction. Doesn’t God attempt to do the same with us? Due to her lack of experience, she was unable to really grasp, in a meaningful way, the predicament that she was in.

I decided, then, that I would speak to her in such a way as to impress her with the precariousness and seriousness of the situation. I did this, not because I am a hateful tyrant, but rather because I am a loving husband. My love compelled me to speak in a direct, forceful, and intense way. If she could be convinced that she needed to implicitly trust my words and obey them she could avoid a broken nose. Isn’t God compelled to speak similarly to us for the same reasons?

The worst sight that I’ve seen in six years was that of my wife all bloodied, bruised, and bewildered after her altercation with the ocean floor. How must God feel when he looks at us after we hit the bottom?

When I realized that Sherise had received a free nose job courtesy of the ocean I completely forgot that she’d ignored my instruction. I was overwhelmed by my desire to save her. Isn’t it just the same with God?

Matt lives in Newcastle, Australia with his wife, Sherise, and Son, Max. Matt's calling is to tell the truth about God and to help people walk in it. Matt spends his recreational time playing with Max, kissing his wife and surfing.