I get admittedly nervous when I hear these words: “Pastor Asscherick, you changed my life.” You see, I’m not in the life-changing business; I’m just a messenger, a mail carrier. The biblical term is evangelist, one who carries a message.

My response has, over the years, become reflexive: “Well, thank you, but I’m sure it was Jesus Christ who changed your life, not me.”

Jesus Christ is in the life-changing business, and He is awesome at it. For my part, I find it easy to “sell” and “tell” such a successful and consistent “product.” They say that Porsche salesmen do little more than hand out keys, because the cars sell themselves. I like that. That’s what we evangelists do: hand out keys, “the keys of the kingdom” (Matthew 16:19), no less! What we’re offering is better than any Porsche, however.

On my most recent trip to New Zealand, admittedly my favorite country on earth, I heard those words again: “Pastor Asscherick, you changed my life.” The man was dark-skinned, round-faced and smiled a smile that was as much eyes as mouth. His whole face radiated a joy that was as pure and beaming as I’ve seen. I liked him already. He introduced himself as Demcy, then told me a story that warmed my heart deeply.

Demcy had been living with his wife, Thrace, and three children, all boys, in Christchurch. He and Thrace had moved from Sri Lanka many years before. Raised a Roman Catholic, Demcy had a genuine, though not always enthusiastic, interest in spiritual things. He believed, sure, but not particularly deep. This, though, was about to change. 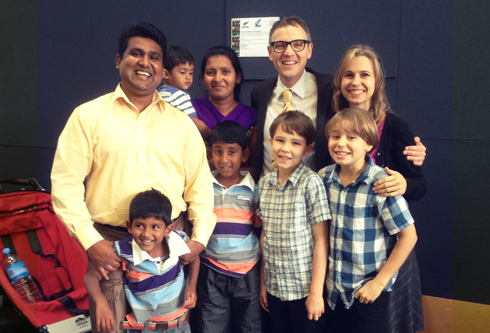 After seeing flyers and billboards around town advertising a meeting, What Does the Future Hold?, Demcy finally, on February 21, showed up. His heart thrilled with the truth he was hearing! This was the God of love and freedom He’d been looking for, and that he’d always believed was there, somewhere!

He left committed not to miss another meeting, but, alas, an unforeseeable disaster intervened.

At 12:50 in the afternoon on February 22nd, beautiful, serene, and quaint Christchurch was racked by a powerful earthquake that killed hundreds, and shattered the lives, businesses, and confidence of thousands. It all happened in about 20 seconds.

The city, more than two years later, is still picking up the pieces and will be for another decade at least. This was the second such earthquake in less than six months, and though this one was weaker on the Richter scale than its predecessor, its shallowness, speed, and location made it far worse and many times more deadly.

God’s ripple effects are greater than any earthquake.

Demcy, like many others, loaded his family in the car that very day and drove away from their beloved city. In Demcy’s case, they drove all the way north to Auckland. He spent the next two months looking for a new job and returning to Christchurch to transport his remaining things to Auckland. His whole life was in a great upheaval; he longed for solidity, hope, and deeper meaning.

He remembered that single meeting he’d attended and googled the presenter, “David Asscherick.” To his happy surprise, he found a set of similar prophecy lectures that I’d delivered before. He watched them day and night. He was surprised to learn, toward the end of the lecture series, that I was a Seventh-day Adventist. Nevertheless, he was persuaded that what he’d found was the truth. The next Sabbath he attended a local Seventh-day Adventist church.

The local pastor faithfully mentored, encouraged, and discipled Demcy and his wife, and soon they were baptized. A family torn from their home city by an earth-shaking quake, were now united in Jesus Christ by His life-changing truth. Demcy is now a deacon in his local church, and his mother, who still lives in Sri Lanka, is studying for baptism! She has even made her business, a hotel, available for Sabbath meetings in her town, which the local Seventh-day Adventists have been thrilled to put to use already.

God’s ripple effects are greater than any earthquake.

That meeting, from my perspective, sure looked like a grand failure after it’d been abruptly stopped halfway through and resumed rather weakly nearly a month later.

But sometimes what looks like failure is really a great success!

May 8, 2012 A Crippled Arm, Doubts and Something Better Read More