Here’s a miracle story. Fifteen years ago, I was preaching an evangelistic series in Grand Rapids, Michigan. The series was a joint venture with Adventist-Laymen’s Services & Industries (ASI) and the Michigan Conference of Seventh-day Adventists. ASI had provided our evangelistic team with dozens of teenage youth who would go out, knocking on doors, looking for Bible studies.

Two young ladies knocked on the door of an 18-year-old boy named Nate. Giggly and nervous, they invited him to the upcoming series. He rebuffed their invitation. Then, just as the conversation was ending, they mentioned that the speaker (me) was a skateboarder and former punk rocker. His curiosity piqued, he took the flyer.

Two days later, he drove himself to the meetings in a hearse. Yes, his car was a hearse. Nate was a punk rock kid, complete with wild hair and clothes. I knew the type well because I had been one just a few years before. Nate listened with interest, which was surprising to some, given his appearance. I was not surprised at all.

When those giggly young girls knocked on Nate’s door, he was planning to kill himself—that very day!

By meeting’s end, Nate had missed very few, if any, of the nearly 30 nights. Wonderfully, along with nearly 100 others, he made the decision to be baptized. From the beginning it was clear that Nate was a special kid, a deep thinker. It was also obvious that he was an evangelist, because soon after his own commitment to Christ, his younger brother and parents were also baptized. Nathan had reached out to them with the truth, not just words and ideas, but by a changed life and with the effusive love of Christ.

Nate continued to study and became a Bible worker, a position he held for several years. Then he enrolled in the theology program at Andrews University with hopes of becoming a pastor. Nate set himself apart at university by being principled, possessing ministry experience, and having a willing spirit and a keen mind. His younger brother, Jacob, also entered Andrews to pursue his own dream of being a pastor! 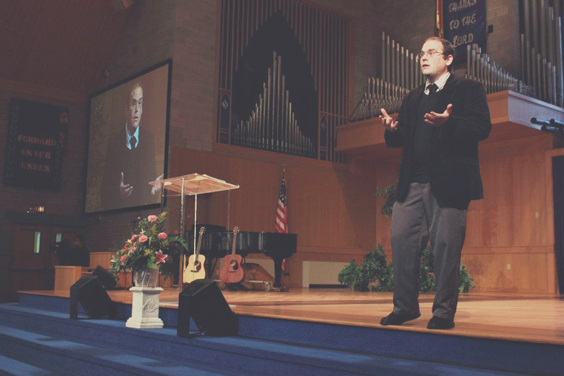 Today, Nate is a pastor. So is Jacob. Both in their home state of Michigan. It’s a beautiful story, made more beautiful still by this: when those giggly young girls knocked on Nate’s door, he was planning to kill himself—that very day!

Let that sink in.

God is in the business of saving people, not just in some spiritual or ambiguous sense.

So, I just saw Nate yesterday and I told him, “I’m so glad you didn’t kill yourself.” We just laughed and embraced.

God is in the business of saving people, not just in some spiritual or ambiguous sense. He saves the actual lives of actual 18 year-olds and their actual families. He plucks them from the fire and sets them as diamonds in His crown. He gives them an abundant life. He makes them miracles.

And that’s what you are: a miracle—a miracle of grace.

May 8, 2012 A Crippled Arm, Doubts and Something Better Read More