New Zealand: My Glory and Joy!

It is no secret to those who know me that I regard New Zealand as “the best country on earth.” I’ve been there four years in a row, and have no plans or desire to stop my annual visits. My most recent visit, which I’ve just returned from, was a wonderful blessing, as it afforded me many opportunities for ministry and fellowship.

Christchurch is New Zealand’s second largest city, and it was my first stop. I was looking forward to catching up with some of those who had been baptized as a result of our efforts over the past few years. As providence would have it, I was able to reconnect with more than a dozen of them. What a joy it was to see their bright, happy and energetic faces at church on Sabbath morning. I hadn’t alerted any of the three churches I visited about my arrival, so my presence was a genuine surprise. A good one, I hope!

My heart leapt with joy to see Debbie and her mother sitting in church soaking up the sermon. And Theresa and Collin both looked so content and settled in their new faith. James was making excellent contributions in Sabbath School class, and Colleen was smiling and putting distance between her and her depression. Renee and Isaac were smiling and attentive, clearly enjoying the service. Amos is a regular missionary and powerful young preacher. Adrian and Kate are sharing their love for Jesus with whoever will listen.

There is no greater joy and satisfaction in all the world than seeing those who’ve accepted Jesus Christ and His end-time message growing and rejoicing in their new faith. I resonate deeply with Paul who wrote to the believers in Thessolanica, “For what is our hope, or joy, or crown of rejoicing? Is it not even you in the presence of our Lord Jesus Christ at His coming? For you are our glory and joy” (1Thessalonians 2:19-20).

Our meetings last year were interrupted by a deadly and devastating earthquake. Hundreds were killed, and the central business district (CBD) was left in war-like ruins. It happened on February 22 at 12:51 p.m. The CBD received the brunt of the quake’s deadly force; I should know, I was there. 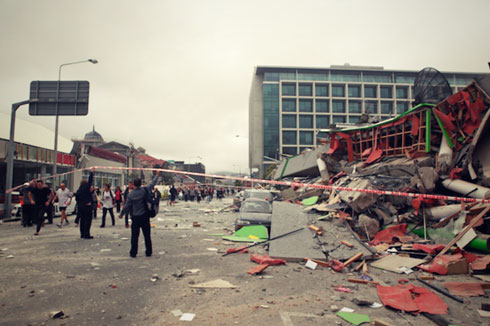 I’ll never forget how suddenly and violently my apartment began to rock. I was on the third floor and was certain my building was going to fall. It didn’t, but many others did. I stumbled clumsily down the stairs and out the door to “safety.” That’s when I saw the devastation, and I could hardly believe my eyes. A once quaint and clean city had been transformed into a dilapidated mess within seconds—20 seconds, to be precise. Scared and panicked people were everywhere. The ground continued to rumble with aftershocks, some of them unnervingly strong. I helped an elderly lady named Toby to safety, then walked eight miles across town to reunite with my family who were visiting friends on the outskirts of town. Praise God, they were safe!

That was more than a year ago, and the city is still picking up the pieces, both physically and emotionally. Thousands have moved away, hoping to find a safer, better place to settle down. The CBD remains a ghost town, and may never again be open for business. There is even talk of moving the city center 10 or more miles away from its current location.

As you can imagine, the earthquake put an abrupt stop to our meetings. We were not able to resume for nearly three weeks. But, resume we did! When the quake had struck we were just halfway through our series. Once the city council OK’d that public meetings could resume, we were back at it. Wonderfully, our attendance held reasonably strong given the circumstances.

And God gave us a harvest!

Some were baptized on our final Sabbath there (nine of them!), but more came in the follow-up which was conducted by the local church working with two ARISE graduates, Samuel and Amber Riemersma (who did an A+ job by all accounts!).

Yes, I love New Zealand. The mountains and rivers and wild places, but even more than this, I love the people. They are a special and hardy people down there near the earth’s bottom. They are God’s children in, as they like to say, “God’s Own Country.” They often abbreviate this simply as “Godzone.”

And that is my prayer for New Zealand. That it would become God’s Zone! And Christ’s Church!